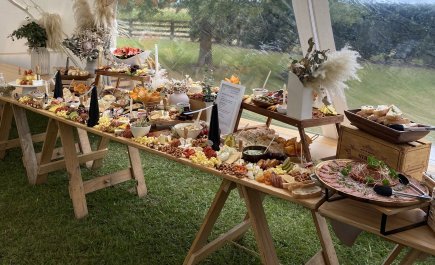 GEM cuisine is named after our Green Eye Māori Chef Tihema Johnson. With a wealth of kai making skills he has been serving the local plates of Gisborne for the last six years at the likes of Reka Cuisine and the Gisborne Deli.

Drawing from his diverse whakapapa of Māori, European and Rarotonga our GEM Chef creates simple but effective kai fusions.

Following in his Nan’s footsteps, GEM kai is infused with manaakitanga & aroha or what we like to call the GEM Cuisine "secret ingredients".

Learn more about our Story What our clients says?

that breakfast burger is by far ... the best breakfast ive had in a long time ! everything in it was cooked so perfectly and so much flavor 🤤 as for the donuts,
ommmmmgggggg 😍😍😍 speechless

tasted the pulled pork burger and a couple of the yummy doughnuts very yummy food highly recommend! you guys are awesome! 🙌💯

There food there is so freshening definitely value for 💰 😇

Wooow GEM CUISINE!!! The dream team !!!
I had nearly every single guest at my wedding come up to me RAVING about the delicious food 😍😍 I will be recommending you to anybody that asks honestly the food was outstanding!!
The staff so professional !!! you guys are amazing !!
I can not THANK YOU all enough !!! Thank you Tihema and Renee 😘

Please wait while your order is being processed.

Your session has expired. Please login to continue